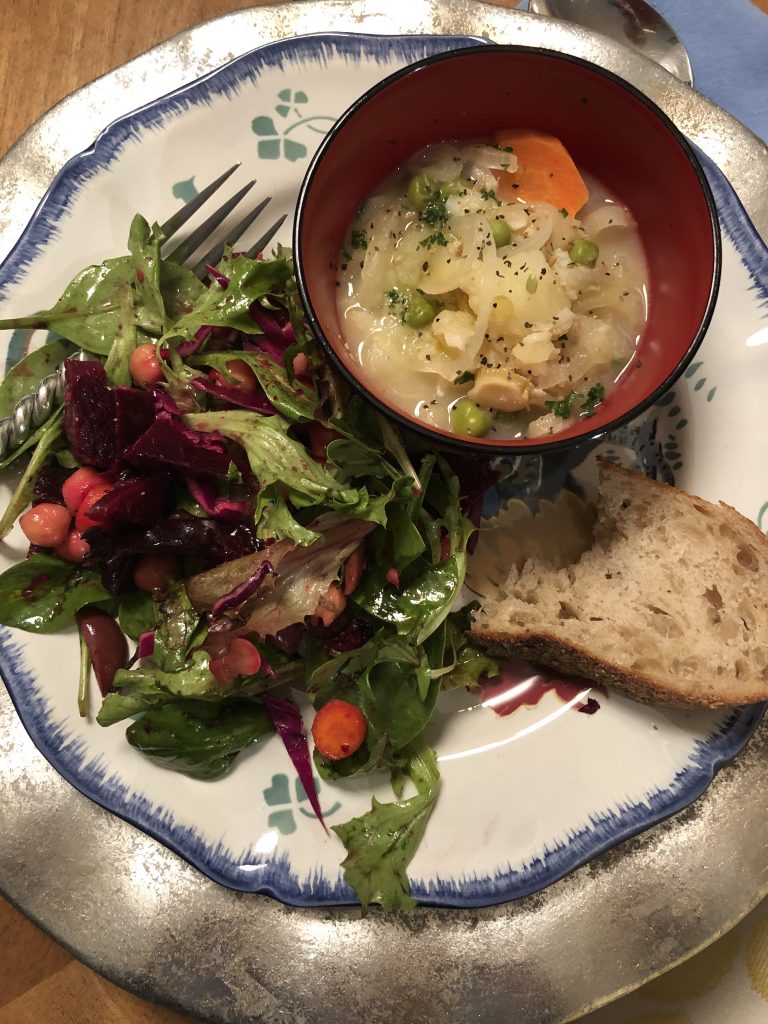 Are you like me, always on the hunt for new ideas?

I’ve made searching for new recipes one of my favorite pastimes. I absolutely love making, with my own two hands, a perfectly beautiful dinner. Bruno and Clio’s Fennel Fish Stew Recipe, is one gorgeous meal and my gift recipe of the week. I can’t wait to tell you how I stumbled onto that delectable dish. But first…

I’ll tell you some of my secrets…

It’s crazy. One of the first things I think about when I wake up in the morning is, what am I going to do for dinner? If I’ve learned anything in life, being the cook of a family takes planning. Feeding a family a well-balanced meal, on an almost non-existent budget, takes real creativity. So, I’m on a constant mission, with my eyes and ears tuned and open to anything related to feeding my people.

“To the cook, the world consists of open mouths.”

I think it’s brilliant. Cooking has become a major source of entertainment on the networks. Rick and I counted 39 cooking shows on Netflix alone, and now there are rows of cookbooks lining bookstore shelves, let alone online. How wonderful is that? And guess who’s watching? The guys.

I don’t know about you, but my son and my two son-in-laws are major players in the kitchen. I love it! It’s such a nice change. I have no memory of my Dad cooking, except for the once a year grilled lamb shiska-bobs and an occasional hamburger or hotdogs. I do remember though his electric knife for the turkey. That was a big deal. But, nada, nicht, nein, no-surr-we-bob on reading through a recipe, planning a meal, doing the shopping and executing to completion. It’s a sweet revolution taking place in our kitchens. Good job guys.

After my son-in-law, Casey turned me onto Alton Brown, and Christopher Kimble’s America’s Test Kitchen, I’ll never just throw peeled potatoes into a pot without having soaked them in cold water for at least an hour. Thanks Mario Batali (I know he’s in hot water) but, salting and leaching out the water from eggplant before cooking has changed everything for me regarding this amazing vegetable; especially digesting the stuff.

When my team is down by 25 points

I made Ruth Reichl’s, Tender at the Bone, lemon soufflé as my go-to dessert. It’s the perfect escape when my team (to remain unnamed) is down by 25 points at the start of the fourth quarter. I can hear the game, but my nervous hands are busy separating eggs, whipping the whites, making a roux etc. One of the reasons Rick loves the NBA playoffs, he knows I’ll be in the kitchen panicking. I’m on a mission now to find a replacement since we’re not eating eggs and sugar any longer.

Have any of you read Madeleine Kamman, A Gastronomic Memoir, When French Women Cook? If you haven’t you should, or buy as a gift for the cooks in your life. And then there is Anthony Bourdain’s, Kitchen Confidential. It’s unreal, and unbelievably sad that he’s gone. I can still hear his wonderful gravelly voice, as I revisit Bourdain’s small jewel of a book.

Here’s where I admit to a lifelong love of books, or anything in print for that matter. My love of reading crosses over genres from Cookbooks to modern literature, Sci-fi to YA, Non-Fiction, Memoirs, Classics, even Poetry and an occasional play… I think you get it, I love to read. I mean, I really love to read.

My kids still talk about the time I set myself, or my favorite green sweatshirt on fire, while leaning against the stove cooking the oats for breakfast. I was lost in reading the western novel, Lonesome Dove. Old Pea-Eye, a lovable cattle wrestler, was surrounded by Ogallala Sioux warriors, and had taken an arrow in the backside. He couldn’t die. The cattle herd still needed to make it to Montana. Thank God, my sixteen year old son Peter came in the kitchen smelling the smoke when he did, I might have lost the whole sweat-shirt.

I would cast Javier as Bruno… photo pulled from britannica.com[/caption]

While on vacation A couple of years ago I found a French mystery by Martin Walker in my daughters bookcase. Bruno, Chief of Police; A Mystery of the French Countryside. Bruno, Bruno, Bruno I have such a crush on him. Not only is he the Chief of Police of a small village in the South of France, he’s a bachelor and wait for it, he loves to cook!! Even though Javier Bardem is Spanish, I cast him in the role, in the movie playing in my mind. Inspector Bruno grew up in an orphanage. The village he serves fills a void in his life; every Monday night, with his friends, who don’t have families to share the best part of the day with, Bruno hosts dinner. In the last couple of books, the group has grown and they’ve been switching off and pot lucking. Isn’t the idea fabulous?!! I know, I sound nuts, but it’s soooooo good.

In one of the books (there are 13), Bruno details whipping up a fennel fish stew, for that, (blank word) Isabelle, who broke his heart by moving to Brussels for a job with Interpol. I couldn’t believe it, and what a doll he was cooking her the soup, when she came by for a visit. “Don’t do it Bruno.” I thought, “You’re just getting over her.”

Fennel fish stew!! I’ve taken liberties with the recipe. Granted I’m not in a eighteen-century farmhouse, with a chicken coup overlooking the Dordogne River Valley, but I can run to the supermarket, buy some cod, a large fennel, and pick through the Yukon Gold potatoes like I imagine Bruno in his garden… 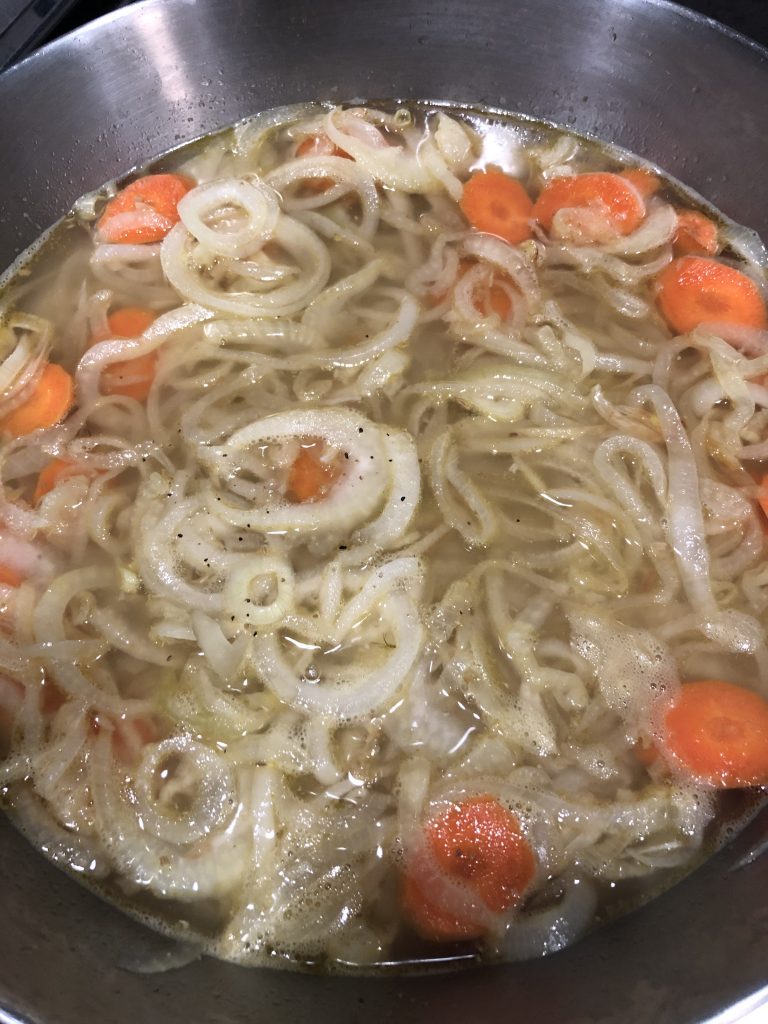 In the meantime, drain potatoes, and add to a pot of boiling water. Cook until the fork can run through. Ladle around one cup of the potato water into the wine broth, or if you want, add vegetable broth. Last night, the potato water worked perfectly. I think Bruno probably would’ve done the same…

Add the cod, potatoes and peas, and if you need another ladle of water/broth/wine (your choice), cover and cook for 10-12 minutes. Giving yourself enough time to slice a delicious loaf of artisan bread, and make a fresh green salad. Died and gone to heaven delish…

I found the bread recipe I referred to in last week’s, Tortilla Tofu Scramble 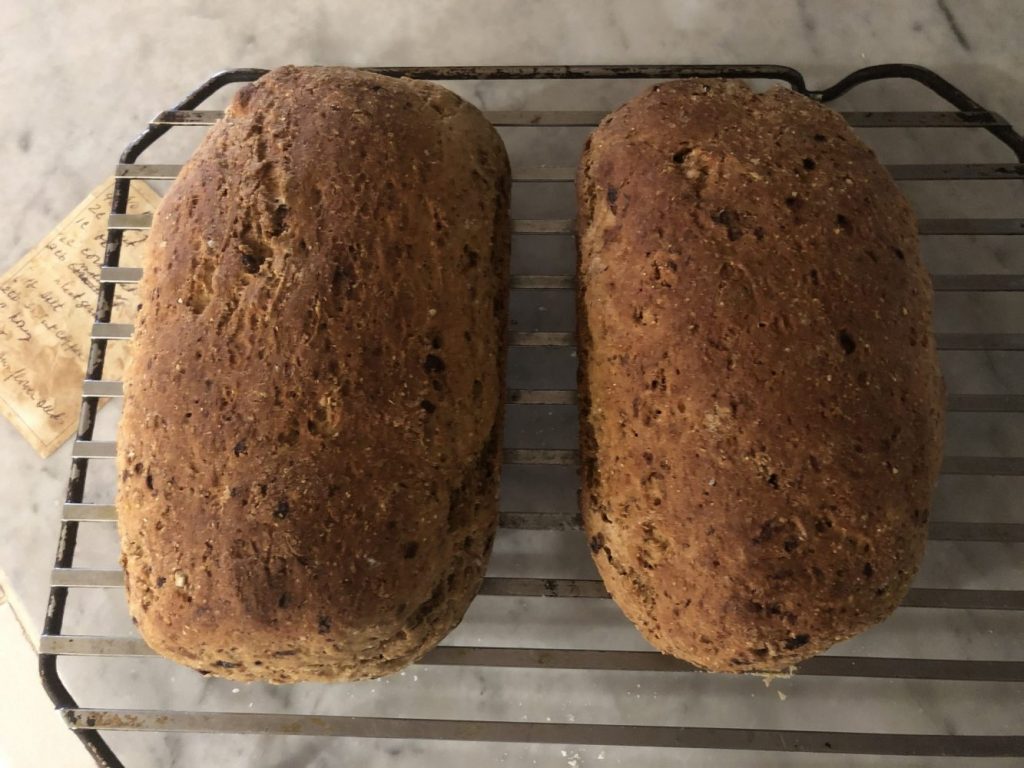 I called NPR’s Chef’s Edition with a question regarding using Rye flour in bread. My question was intriguing enough that the call screener invited me to ask the question live on air. This guy was very serious, and told me I had three things to remember; 1. He would call back in five, not three, not seven, but in five minutes. 2. No product names or restaurants. 3. Absolutely no cussing. Holy Shit, I was thinking. How could he read my mind, and see over my shoulder on the counter, two hardened and failed loaves of inedible rye bread.

A delightful conversation ensued about the difference between those dark sourdough breads in Germany and ours. “That’s a great question.” He said. We talked about farming grains. I wondered if it was because we irrigate and they get so much rain. “Now that’s a thought” He added. I ended up giving the host, Uncle Rodger’s Hippie Bread Recipe, he admitted he had never heard of Hippie Bread.

I can still hear the kids screaming through the house to Rick, (in the bathroom), “Mom’s on NPR!” Incidentally, two weeks later, The Eating Well Cookbook arrived in the mail; I had won the question of the week. Huge!  Beside winning the Christmas Quiz in 7th grade, and First Place in a five-mile fun run, I’d never won a thing; this win was epic. We went crazy!!

P.S. If you only read one Western novel in your life, read; Lonesome Dove, by Larry McMurtry.  I promise you, you won’t be able to put it down. 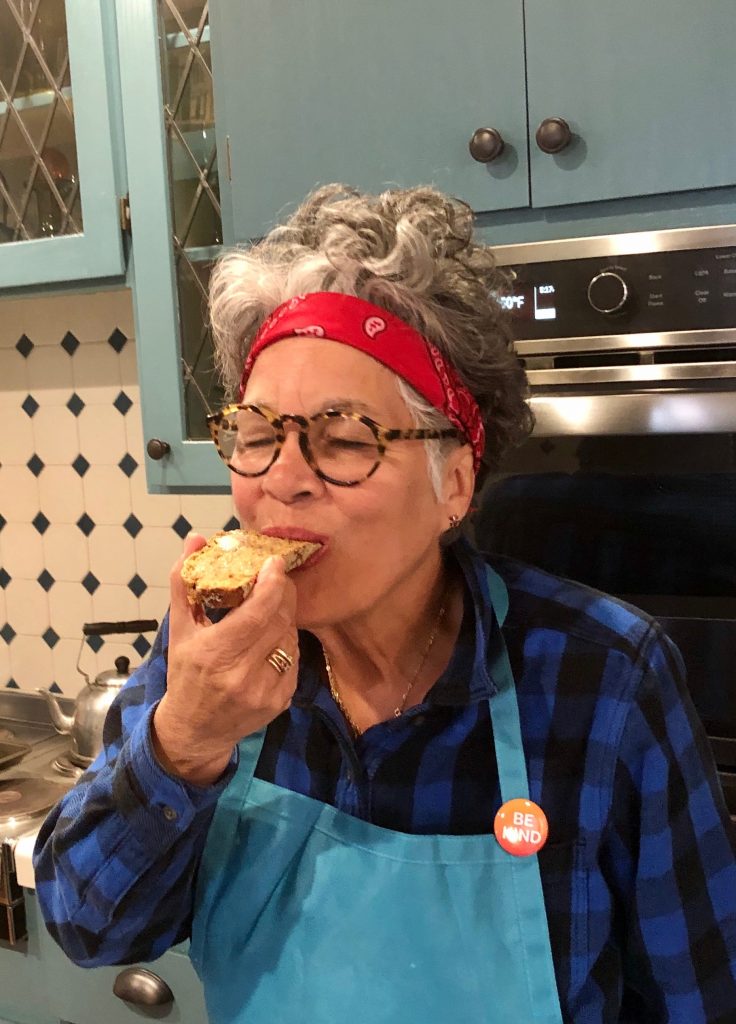