Today is day 39 of the mandatory shut-down in the State of California. For 39 days Rick and I have been eating our way through Covid-19 in the best way possible; boosting our immune system with our diet. 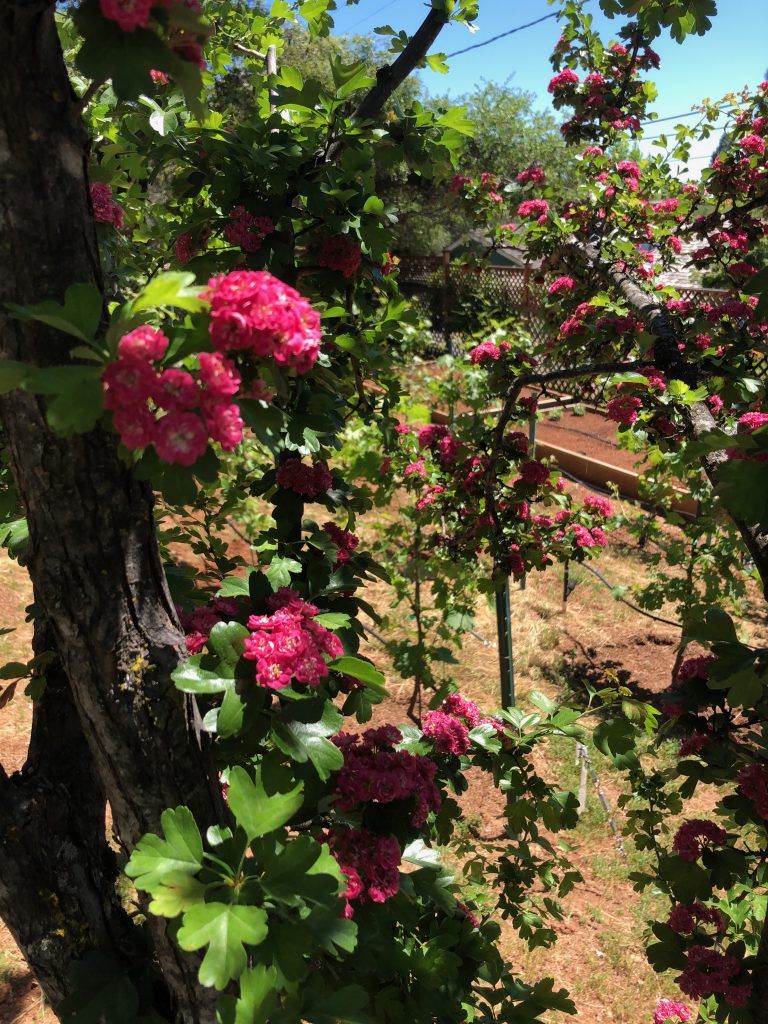 Rick stumbled onto this powerful quote on Sunday while researching Hawthorn Trees. Ours, for some reason have been putting on a blooming, spectacular show this year. He was curious about those precious little pink bouquets covering the tree. His reading took him on a little journey through Germany and England, who for centuries have used the berries, blooms and even the bark of the Hawthorn Tree in treatment of heart disease. But I was arrested on that very simple, yet profound quote he read to me.

I haven’t been able to get Hippocrates out of my mind.

I mean we’re talking 2,400 years ago. We’re fortunate Rick’s cancer was at the stage where changing our diet could possibly change the outcome. For one year we have been on a mission, making sure whatever we eat becomes the medicine he needs. And with the threat of Covid-19 virus, the diet has become even more important.

Again, I’m not a doctor

But I really want to minimize needing to see one, and by that I mean, doing everything within my powers to build my immune system in the most  healthy way possible. OMG, I sound like my Mom who I can see at the sink peeling an orange, and eating the whites of the peel. “Clio, this is where all the riboflavin is, probably the best part of the orange.” Or in the 90’s when she told me, “Imagine lentils are like little sandwiches surrounding your cholesterol and taking it out of your body.” I’ve never looked at lentils the same since.

Word on the street regarding boosting our immunity during Covid-19

I’ve read five different articles and all are saying the same thing, in a nutshell:

“What’s for dinner? Plant on it.” Martha Stewart Living

This week’s recipe, Vegan-Cheese Stuffed Tostadas I found in the April edition of Martha Stewart Living. Immediately I flipped through the pages, skipping over, Beauty and the Ask Martha sections (my favorite), and headed for the recipes. I could just see in my fridge some tortillas and what was left of a little bundle of cilantro needed to be used pronto. I took liberties and tweaked the recipe by adding some Soyrizo Meatless Soy Chorizo. If you haven’t tried, you must. I’m going to invite my meat loving friend over and see if he can tell. I report back how that goes. 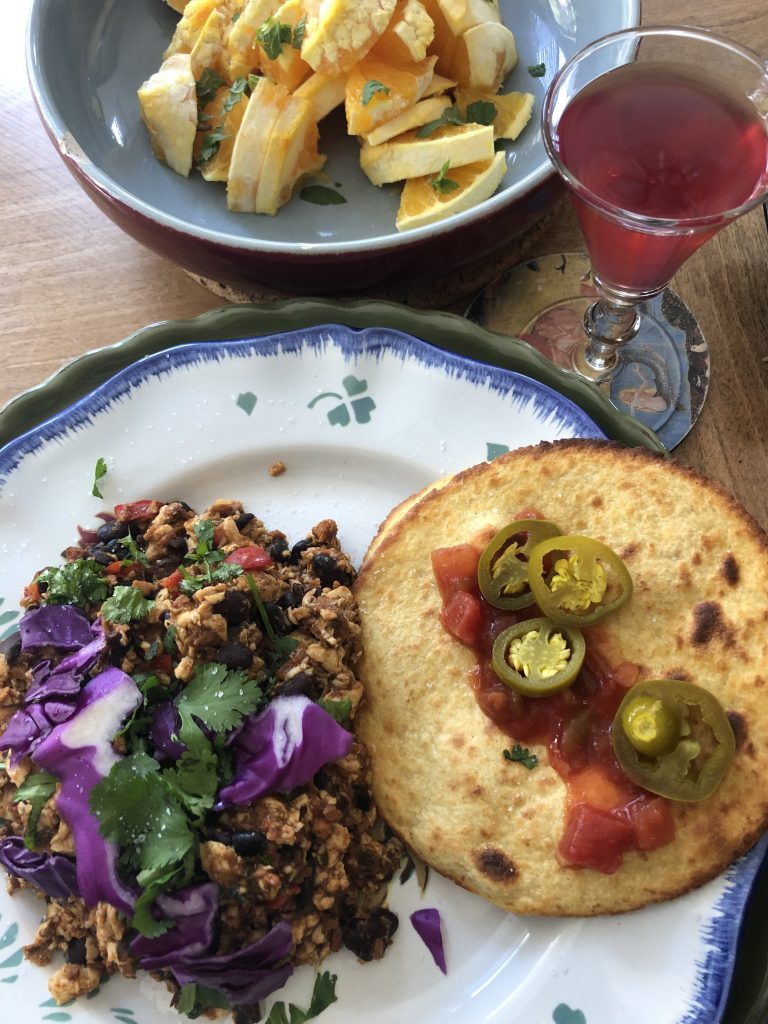 Martha used Monterey Jack, I substituted with Dairy Free. BTW, I’ve made these three times!! Also, worthy to mention, her monthly mag is including some enticing Vegetarian recipes these days.

My 89 year Mom asked what I was going to write in my blog this week?

I told her I was thinking about Martha Stewart. “Actually Mom, you guys have a lot in common. Finding the beauty in the most simple things.” Mom said, “You know, I’ve always admired her. She’s a doer.” And then my mom surprised me with,

“What’s the deal with Snoop Dogg?” 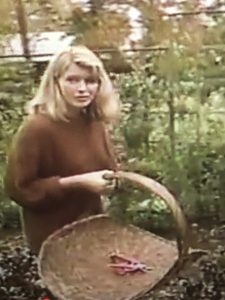 We have never met, but you have been in my life since 1986 when PBS Television aired your Holiday Entertaining with Martha Stewart, Thanksgiving Special.

I had just celebrated my 31st birthday weeks before and had decided for some reason evading me at the moment, to host Thanksgiving for our family; a first. I was in the kitchen busting my ass, getting fresh cranberries simmering on the stove: chopping celery and onions for the store bought bread cubes I planned to use for the stuffing and had just finished peeling a mound of potatoes.

As I stood debating using marshmallows over the yams, I realized I was the only person in the kitchen. Not only was I alone, a quiet voice beckoned from what was usually a rambunctious family room.

I peeked in, not to hear a football game, but to see my husband Rick, sitting on a footstool a couple feet away from the television, and all three kids sitting at his feet. Four pairs of eyes were glued on you in your jeans, and sweater, walking through your garden with an old basket for cuttings. 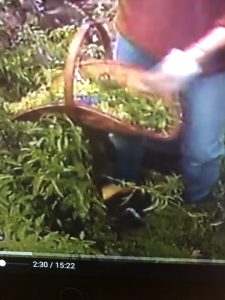 You folded out a little leg attached to the bottom of the wicker basket (we don’t have those in California), and pushed it into the ground, so you could harvest, unheaded the herbs and fresh greenery. “I’ve never seen a basket like that.” Rick said. I felt like I was hearing the sound of velvet as you slip your whole hand easily between the skin of the turkey and the meat.

Or Rick was… Every once in a while during the following year, he’d bring you up, and what he was going to do for our next Thanksgiving. If you knew Rick, you’d be surprised as I was when hearing him fantasize about the big November meal he was planning. At this time in our life, he was farming walnut and almond orchards, and managing a walnut processing plant his family had built. In other words, he was gone by sun-up and home with the sunset.

He planted pumpkins in the garden

And scoped out where the ducks were landing out in the back of the orchard during their flight south. He had plans for the little breast he was going to pluck and serve for an appetizer. “Let’s skip the turkey and do pheasant this year.” He announced one fall day after seeing a rooster run across the field into the brush along the slough. I was game too. “This year we will start a new tradition.” He added.

Something about watching your tour of Turkey Hill Farm, and listening to all the meticulous preparations for that dinner; herbs growing in your garden used as centerpieces, autumn leaves garlands, and your mentioning smoking pheasant in the smoker, something in your quiet voice, lit a fire in Rick. It was all so doable. Everything would turn out. Life would go on, and more importantly, we’d be okay. It was all ours for the doing.

So Martha from one family you touched in a big way.

P.S. Yesterday, I showed him this week’s blog. Without missing a beat he said with a faraway look in his eyes, “Remember how she even made little oak leaves out of the pie dough?” Martha, he’s still talking about your pies.