We’re on the journey towards the NutriBullet smoothies, just hang with me for a minute… 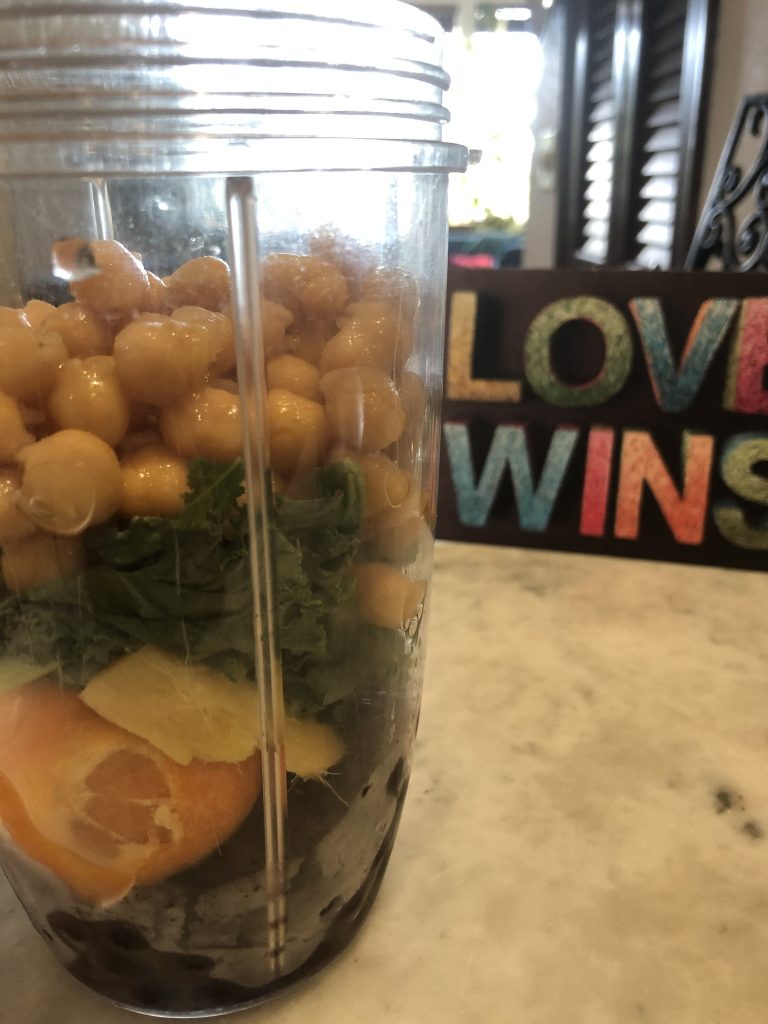 As you get to know me better, you will read about some of the wild ideas gone terribly wrong and the ones that have gone wonderfully right in my kitchen. Do you remember the big craze about six years ago, juicing? I happened upon the afternoon show Oprah, where her guest was a man who had lost a hundred pounds by traveling around the country, living on vegetable juice and selling the Juicer.

A class reunion was coming up; I hadn’t gone to one in twenty years and really wanted to go minus a quick 15 pounds. Well, I bought into it, lock, stock and juicer. Reason two to juice, our vegetable garden. We couldn’t eat all the produce we were growing quick enough. Baskets of vegetables were being left on our neighbor’s porches. I thought my next door neighbor sort of scowled at me the last time I went to her door. “I don’t cook.” she said.

So, we started juicing every morning

…every kind of combination of vegetables you can imagine. I got in the habit of throwing in an apple with our morning juice, in order to add a little sweetness, and our nightly tomato, bell pepper, carrots, and cucumber with a dash of hot sauce became our dinner. In the beginning it was great. I almost immediately lost a good few pounds. I thought, this is what I’ve been missing all these years. A liquid diet. Our families were concerned, “What the hell are you guys doing?”

Even though I was forcing down celery juice with ginger for lunch, I juiced on. Rick is one of those guys who pretty much will eat anything and doesn’t give food a second thought. After three weeks, I found myself lurking in the bakery while shopping, acting and I’m sure looking like someone who was living on nothing but juice. I secretly bought cookies, donuts and even had a pastrami on rye sandwich made for me at the deli. And then, I noticed fast food wrappers in Rick’s truck.

That bum, I thought. A good friend of mine who is a medical doctor, told me I wasn’t getting any of the fiber, only the water from all the vegetables I was juicing. I did in fact lose ten pounds, and bought a killer dress for the reunion. Though, I never got a chance to wear it, as I fell down the night before and was in the emergency room, when I couldn’t put weight on my foot the next day. Sure enough it was broken, but man, I thought I looked great as I sat on the x-ray table. I returned to making our oatmeal everyday, though I switched to non-fat milk.

Before ‘the Bullet’ came into our lives, we had our oatmeal for breakfast five mornings a week.

Our oats got raves from anyone who had them, these suckers were loaded. And by that I mean; oats, flax seed meal, raisins, dates, apricots, walnuts, cinnamon (more about my love affair with cinnamon later), brown sugar and low-fat-milk. Hmmmm were they good. I almost immediately put back on seven pounds, and would find myself starving two hours later.  (Be sure to check the blog in two weeks for my ever-evolving, Clio’s Warm Grains).

Ever since Peter, our son gave us a NutriBullet for Christmas, smoothies are an everyday thing.

I thought, what the hell, give it a try. After reading what I thought essential to starting out a day with putting in the best fuel to get me to noon without a couple trips to the fridge, I came up with this common sense list of ingredients. This will make enough for two 16 oz. glasses, in our case, beer mugs.

Two Large torn leaves of fresh Kale, I do the purple Kale*

2 Cups Milk of your choice, we do Cashew* because it’s creamy

Like the oats, these smoothies are packed. Through trial and error; leaving out the banana and yogurt, adding flaxseed meal and cashew milk, I think we’ve got  a perfect meal in a beer mug.

Sometimes, I’ll get to 2 ‘clock pm before I’m even thinking about food, that’s huge. Rick has reported the same thing.

Regarding all the asterisked items:

*Mandarins + peel contain the highest concentration of naturally occurring decongestant, pseudoephedrine; go to Placer County Mandarins order a bag, approx. $15. We picked and bought bags in December, and put them whole in the freezer.

*Turmeric, make sure it has been tested for adulteration, added metals for color and chalk. We only use what has the USDA Organic Stamp.

*Nutritional Yeast, make sure it is Fortified, not all nutritional yeast is, shout out to

*Anthony’s Nutritional Yeast, loaded with all the goodies we need.

*Viva Naturals Cacao Nibs 26mg calcium, I whirl them in my

*Melita Coffee Grinder. Flax Seed Meal, I get the organic from bulk and use Melita, (best Christmas gift ever from Mom)

*Cashew milk? Yesterday, I was having a cup of coffee with my next door neighbor. We were talking about our smoothies, and she suggested, I replace the cashew milk with two tablespoons of Organic Almond Butter and two cups of water. Get this, the Cashew milk has less than 1g Protein per 1 cup. Whereas, the almond butter has 6g Protein in 2 Tablespoons. So this morning I did it. I didn’t tell Rick and will be following him closely through his day. I’ll report if I notice any difference. I’m not a good test subject, already obsessing a little, because I equate creaminess with goodness…

I just do it because I love the color, can’t hurt…

I’ve gotten to where I eat/drink anything beneficial to bones, brains, memory and attitude. I need all the help I can. Every one of the carefully selected items mentioned above going into our smoothies, plays a critical part in fueling our bodies for a day of living fully our lives.

My wonderful Web Designer and Business Developer, Pete Kremer, used a phrase the other day, SEO. Most program coders will recognize this term, but it was lost on me. Pete said it meant, Search Engine Optimization. “Oh, okay.” I said, pretending like I knew what he was talking about, but I hopped on the word ‘optimization.’ That’s what I’m doing in the kitchen, improving to the greatest extent possible what it is I’m busting my ass researching-and-cooking-and-serving this guy I love so much.

At this point you might be asking yourself why the Cacao Nibs? Why the Nutritional Yeast? Regarding the Nibs, they are highly nutritious, exceptionally rich in antioxidants, Gods’ gift of being sugar-free chocolate. What’s not to like. I’ve been stirring ¼ cup into 2 cups of cashew milk and whisk until blended over medium high heat, for a died and gone to heaven nighttime treat. I mean come on, the poor guy’s not eating any sugar.

Nutritional yeast gets its name from the protein, vitamins, minerals, and antioxidants it contains. I use it because it’s high in B Vitamins. B for the brain. I’m down for that! Oh man, am I…

Regarding the juicing; occasionally last summer with my bullet,

I would whip up a refreshing celery cocktail for Rick to enjoy before dinner. A perfect something to sip on at the end of a hot day. It just occurred to me, I never mentioned that Rick doesn’t drink alcohol. So, I’m always on the hunt for delicious, refreshing and beautifully presented drinks. Lot’s more in later blogs regarding that wholesome adventure. 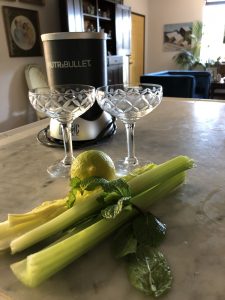 A generous squeeze of fresh lime

I stalk of fresh mint

Around ½ can of sparkling water

Thank you and Stay Healthy

The reception I received regarding last weeks Blog was so wonderful you guys. You have no idea! I encourage you to share with your friends, co-workers, teller at the bank and the guy who works in vegetable department at the grocery store, when we’re over quarantining from the coronavirus, that is. Share.

I thought of our smoothies when I saw stacks of Clementine Cuties bags before the shut down at the store. I bought one, it’s in the freezer now. And there wasn’t any Kale, so I grabbed the last bunch of chard and then I remembered that Clare had told me, she hides frozen peas in her kids smoothies. I had Rick ransack the freezer and he found some. Delicious. What’s good for the grandkids… etc.

Regarding the virus; stay healthy, read some good books, watch only uplifting television and if you can, give to your local food bank.

Get this; Our daughter Clare, who owns her own hair salon in Anchorage just called and told me two of her clients cancelled appointments for this week, but they paid her anyway. Wow! Just a reminder, there are good people in the world.

A big thank you to Gwendolyn Woltz co-founder of wahinemedia.com for those lush photos. And again, I’m so lucky!

If you missed last week’s post (*cough* it was my first ever *cough*), go back and give it a read. Hey, you’ll learn a bit more about me, and… A Cup of Tea.

A Cup of Tea

Warm Grains Are the Shit Literally and Figuratively

Warm Grains Are the Shit Literally and Figuratively